Know Your Moldings: 10 Popular Trim Styles to Spiff Up Any Space 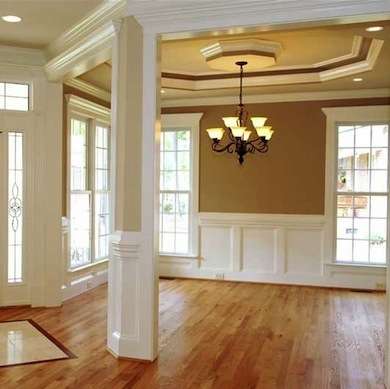 Moldings exist in myriad forms. Each is designed for a specific purpose—framing a door, for example, or providing a visual transition at the junction of walls and flooring. So many types of molding decorate our homes today, it’s often difficult to distinguish them. But here’s the good news: You never again have to be confused between batten and baseboard. Read More 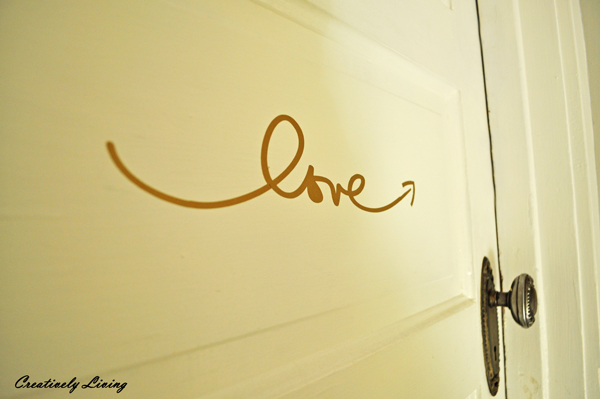 I have a roof to finish, a yard to put it, a house exterior to paint, and what am I spending my time doing?
…decorating a door.

Yes, as part of my stairway remodel (that I was supposed to finish in February), I decorated my master bedroom door at the top of the stairs.

The before was nasty! There was still food dribbled down the door from the previous tenants toddlers. Lots of dirt, the 110 yr old door handle had some paint on it. The door also had a gold deadbolt, since the top floor used to be a one bedroom rental…. Read More

DIY: How To Paint A Car Like A PRO

Follow these six steps to create an awesome paint job for your vehicle – these steps will ensure that you do a fantastic finish. Let’s get started! 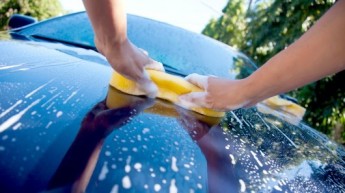 As with any paintjob, proper preparation and a clean surface is crucial to obtaining great results. Before any bodywork is done, make sure that the vehicle is completely clean. First, wash the car with warm soapy water. After the car is completely dried, clean with Sherwil Clean surface cleaner by wiping on with a cloth then immediately drying-off with a clean cloth. 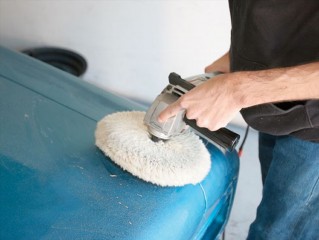 A quality paint job begins with great body preparation and attention to detail. Before applying our Sherwin-Williams Body Filler, sand the area using a sandpaper with a range between 40-grit to 80-grit to guarantee proper adhesion; followed by shaping body filler to the contours of your car. 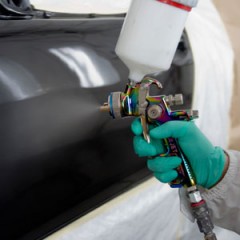 All good paint jobs are the result of patience and quality time. To avoid re-sanding your automobile; apply primer surfacer within 24 hours of bodywork. If any bare steel is exposed from the bodywork process, make sure you spray a medium coat of etch primer over base metal areas. This provides a top adhesion to the bare metal and durable corrosion resistance. Allow your etch primer to dry for at least 30 minutes before recoating.

With a HPLV / gravity spray gun, set the gun pressure to 20 – 25 psi or five – seven psi at the cap with a fluid tip of 1.4mm. Apply two to three medium wet coats allowing three to seven minutes flash time between coats. When applying the primer surfacer, avoid applying one heavy coat as it is better apply several medium coats. The priming process gives that smooth, durable foundation we all love. 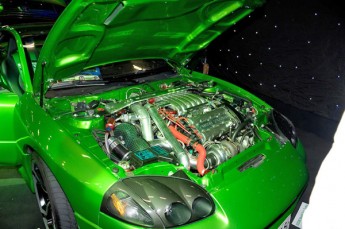 Sherwin-Williams has the colour you need for your next vehicle painting project. Our Dimension® Automotive Finishes come in convenient pint, quart and gallon cans with a mix ratio of 1:1; meaning one part colour to one part Sherwin-Williams Dimension ® DR734 Reducer. This enhances colour and metallic consistency.
Before spraying, use a rag to remove loose particles of dust, dirt and lint that would ruin your paintjob. Apply base coat in a horizontal direction, overlapping each pass with by 70%. Repeat three to four coats until desired colour is achieved. Allow 20 minutes before clear coating. 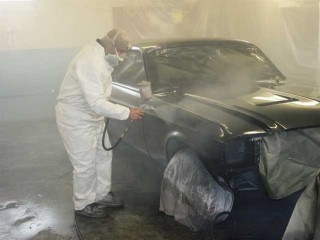 Before applying your clear coat make sure the basecoat is ‘finger-slick’ (dry for at least 30 minutes). Use a tac rag to remove any foreign objects and over spray.

For the clear coat use our Dimension ® Pro Multi/Overall Clearcoat DC5020 to enhance your vehicle’s resistance to chips and scratches. Mix clear coat with Dimension ® DM656 hardener and Dimension ® DR734 Reducer to specific ratio. With a gun pressure of 50 – 55 psi and fluid tip of 1.3mm; apply two coats of clear allowing five to ten minutes to flash between coats.

Photo Credit: My Journey With Candida 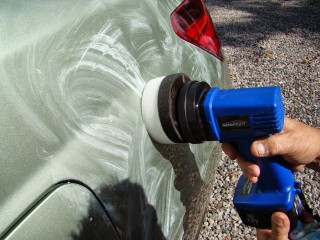 There might be imperfections arising from your clear coat application. (dust nips, runs and orange peel).
Depending on the imperfection the following steps might be used:

Now that the work is finished, your friends and colleagues will envy your new paint job!

If you have a question about paint. ASK HOW. ASK NOW. ASK SHERWIN-WILLIAMS. A technical representative will assist you. 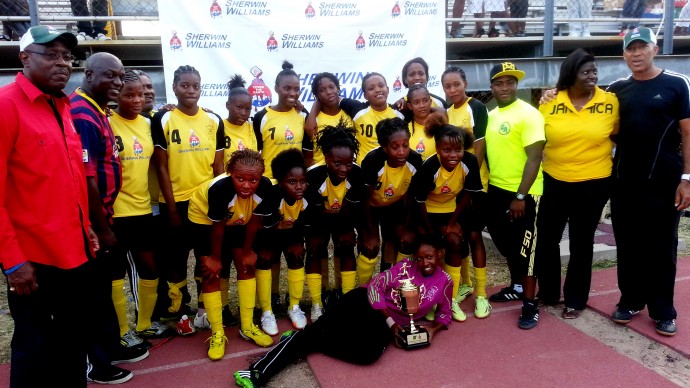 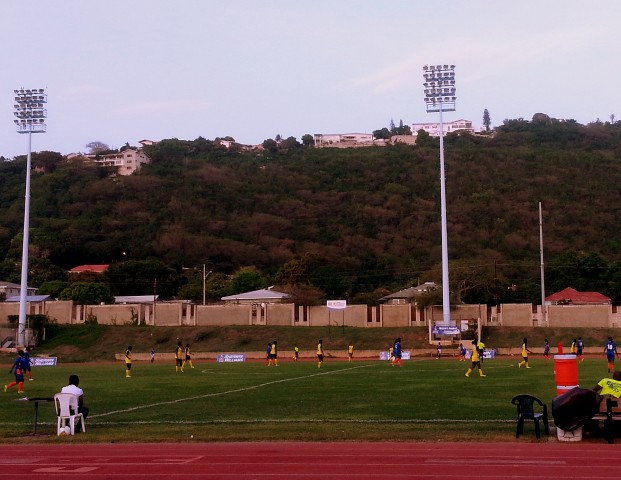 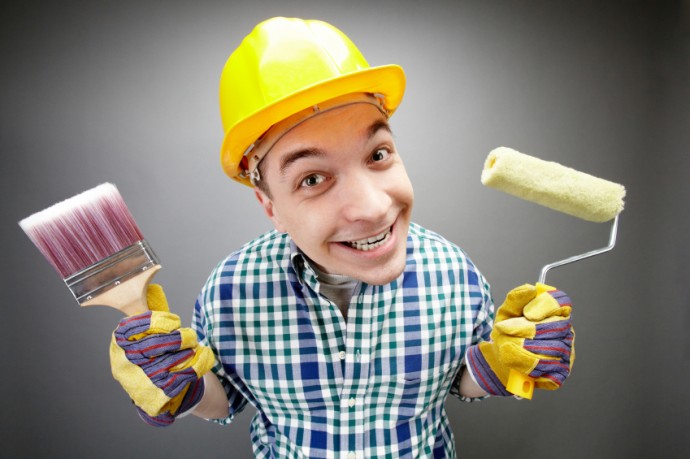 Now that we’re in the late stages of the exterior painting season, it’s time to gear up for those final projects that will get your home winter-ready. Short of repainting your entire house, maybe you need to replace and paint some trim, or simply want to add a new punch color to your front door. Whatever’s on your agenda, you’ll need the right “gear” to do the job. Here are some bare essentials: 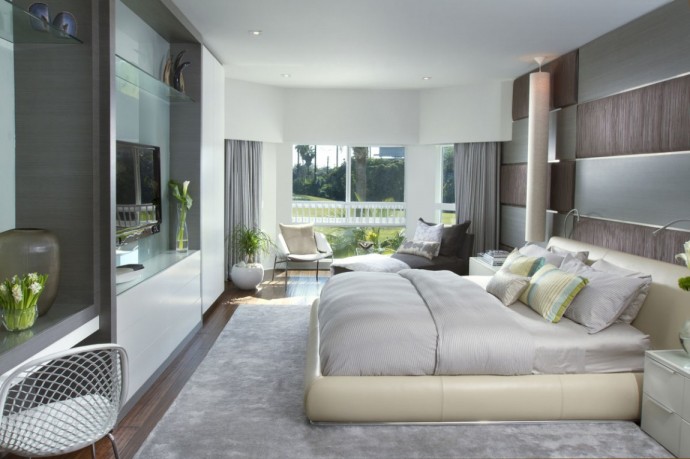 As we gear up for the painting season, it’s becoming clear that neutrals will drive color fashion this year. Grey, in particular, but also white and off-white, will be among the most popular interior paint colors and favored hues for home furnishings. Shades (and tints) of grey – ranging from grey-taupe all the way to silvery tones – are expected to be especially hot. No wonder: The versatile neutral is a sleek and sophisticated color option that adds refinement to any interior.

New lines of wood furniture will be rolled out finished with tasteful grey wash, and grey fabric will be seen on everything from seating options to…. Read More