Sherwin-Williams has always been an avid contributor to the field of sports in Jamaica. We are well-known for our sponsorship of the Jamaica Football Federation’s Sherwin-Williams Women’s League, which demonstrates our commitment to supporting female athletes. Additionally, our love for cricket has led us to begin a relationship with the St. Catherine Cricket Association (SCCA), whom we have proudly supported over the years.

For ten years, we have been the main sponsor of the 40-overs competition in the parish. In 2011, we partnered with the SCCA to offer the Sherwin-Williams Twenty20 cricket competition, which has since experienced extraordinary success. 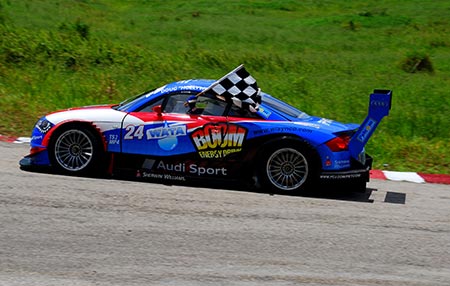 We also take pride in our support for Jamaica’s young, up-and-coming athletes. We are a sponsor of Boys’ and Girls’ Championships, and are also annual sponsors of the Gibson Relays.

As manufacturing and providing automotive paint is one of Sherwin-Williams’ core services, it was inevitable that we become a longstanding patron of Jamaican motor sports. In particular, we proudly support Doug ‘Hollywood’ Gore, a Montego Bay racer with a string of accomplishments under his belt—and with cars coated in Sherwin-Williams paint.

Sherwin-Williams is also committed to promoting health and fitness among its staff. Our Sports & Social Club’s mandate is to promote recreational sport as a healthy leisure alternative for our employees—and to expose them to opportunities to help develop their personal skills. Since its inception in 1998, the vision of the club has been to make healthy living, work and play mutually inclusive.

The main activities in which we participate are football, cricket, and table tennis. We are a founding member of the White Marl Football League, which has since become the St. Catherine Business House Football League.